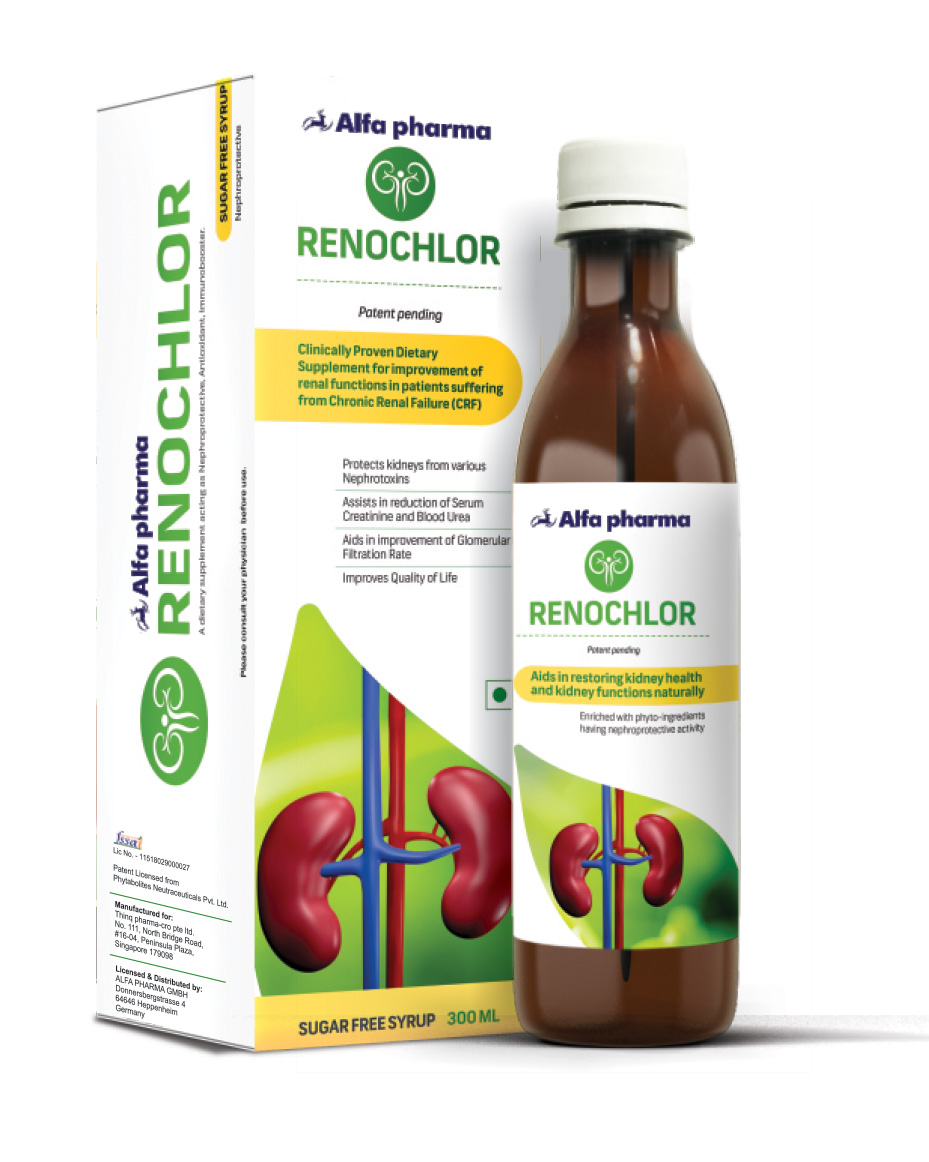 1.  Overview of the advantages of Alfa RenoCare

A single arm prospective study comprising of 34 patients, who were administered 3 doses (10 ml per dose) of the formulation for a period of 2 months with a follow-up of no medicine for one month thereafter, was conducted. For all the patients, standard care of the treatment was continued during the follow-up period. Inclusion criteria included CRF non-dialysis patients aged between 18 and 70 years with Serum Creatinine more than 1.8 mg/dL. Assessment of QoL was based on a WHO questionnaire which has been specifically designed for CRF patients. The primary objective of the trial was to study the efficacy of Syrup RenoCare in reducing Serum Creatinine in CRF patients and the secondary objective was to see the efficacy of Syrup RenoCare in reducing blood urea, increasing hemoglobin and improving Quality of Life (QoL) in CRF patients.

The results of the clinical study are as follows: 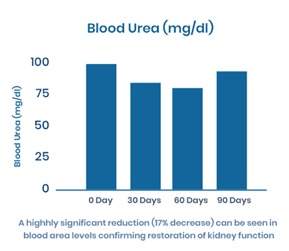 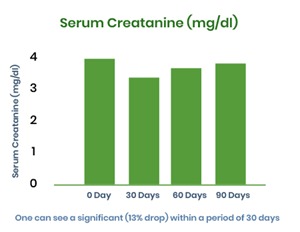 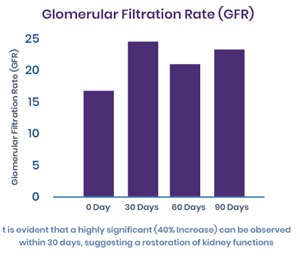 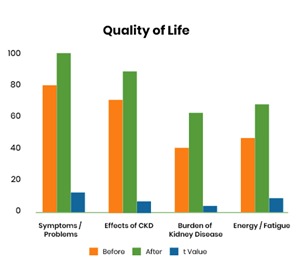 The active molecule of RenoCare is Sodium Copper Chlorophyllin. During the synthesis of chlorophyllin, the magnesium atom at the centre of the ring is replaced   with copper and the phytol tail is lost. Unlike natural chlorophyll, chlorophyllin is water-soluble. The formulation is not poly-herbal and contains sorbitol and       glycerin as adjuvants for better drug delivery

What is Sodium Copper Chlorophyllin?

What is Chronic Renal Failure (CRF)

Markers of CRF – The major markers of CRF are oedema on the body, nausea, increase in the level of serum creatinine and serum urea. The patient starts feeling weak with a decrease in haemoglobin levels and a substantial loss of immunity. The Glomerular Filtration Rate (GFR) is also affected.

Stages of CRF – The GFR rate aids in accessing the advancement of Chronic Renal Failure. Advancement of CRF can be classified into the following stages:

Outcomes of CRF – Untreated CRF in the absence of change in food habits and medical treatment leads to a progressive loss of kidney function, fast reaching to the life-threatening stage. The current treatment is dialysis as per requirement, ranging from once a day to once in several weeks. This does not treat the basic cause but helps in eliminating the wastes accumulated in the blood. Dialysis alone does not provide any remedy to declining haemoglobin, which ultimately becomes a major cause for further deterioration and decrease in immunity.

Kidneys – The Natural Filters of the Body –  Kidneys are two bean-shaped organs situated below the rib cage on either side of the spine. Their primary function is to excrete wastes from the body in the form of urine. Urine is excreted by the filtration of blood by nephrons, the microscopic structural and functional unit of the kidneys. A single kindly can contain up to 1,000,000 nephrons.

Advent of Chronic Renal Failure – Over a long period of time, there might be a slow and progressive loss of kidney functions due to diabetes, high blood pressure, glomerulonephritis and polycystic kidney disease leading to cardiovascular morbidity, premature mortality and reduced Quality of Life. This condition is called Chronic Renal Failure (CRF). CRF is also known as chronic renal disease or chronic kidney disease. CRF eventually leads to permanent kidney failure. As CRF is asymptomatic until later stages, it is often undiagnosed or undetected.

We use cookies on our website to give you the most relevant experience by remembering your preferences and repeat visits. By clicking “Accept”, you consent to the use of ALL the cookies.
Cookie settingsACCEPT REJECT
Manage consent

This website uses cookies to improve your experience while you navigate through the website. Out of these, the cookies that are categorized as necessary are stored on your browser as they are essential for the working of basic functionalities of the website. We also use third-party cookies that help us analyze and understand how you use this website. These cookies will be stored in your browser only with your consent. You also have the option to opt-out of these cookies. But opting out of some of these cookies may affect your browsing experience.
Necessary Always Enabled

Performance cookies are used to understand and analyze the key performance indexes of the website which helps in delivering a better user experience for the visitors.

Analytical cookies are used to understand how visitors interact with the website. These cookies help provide information on metrics the number of visitors, bounce rate, traffic source, etc.

Advertisement cookies are used to provide visitors with relevant ads and marketing campaigns. These cookies track visitors across websites and collect information to provide customized ads.

Other uncategorized cookies are those that are being analyzed and have not been classified into a category as yet.